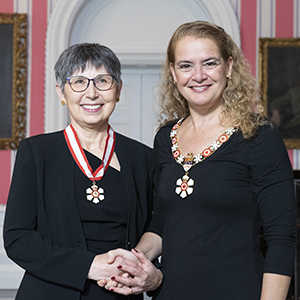 Dr. Werker and Her Excellency the Right Honourable Julie Payette

On November 20th, the Director of our Centre, Dr. Janet F. Werker, attended a ceremony at Rideau Hall, Ottawa, ON, where she was officially invested as Officer of the Order of Canada. Joined by members of her family, Dr. Werker had the pleasure of meeting the Governor General of Canada, Her Excellency the Right Honourable Julie Payette.

The Order of Canada is one of our country’s highest civilian honours and recognizes “outstanding achievement, dedication to the community and service to the nation”. Dr. Werker has been awarded this designation in recognition of her world-renowned work in language acquisition and infant speech perception.

Dr. Werker was appointed as Officer of the Order of Canada in December of last year.